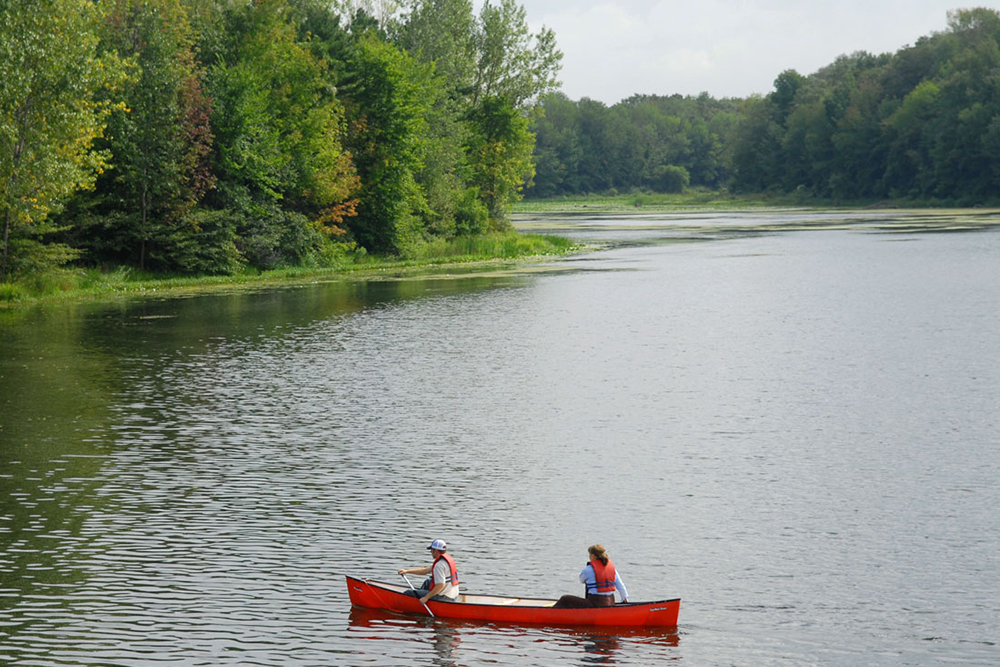 How do I get there?

From the north end of Exeter, take County Road #83 east for two (2) kilometres, turn right (south) at Morrison Line. The entranceway is 500 metres ahead.

You may also find this Google Map link helpful:

Why should I visit?

Morrison Reservoir (Morrison Lake) is one of the area's only inland lakes.

After the construction of Morrison Dam in 1958, the Ausable River, east of Exeter was transformed into a lake ecosystem with many recreational opportunities.

How can I find out more?

Download the brochure for the South Huron Trail (which has Morrison Dam Conservation Area and MacNaughton-Morrison Trail Sections): 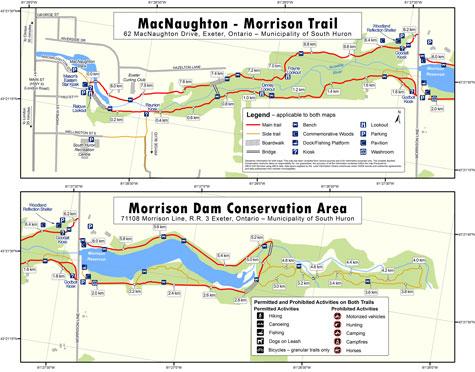 Morrison Dam Reservoir is one of area’s only inland lakes

The dam and reservoir were created, in part, to supply water for the former canning factory in Exeter. At that time, the business was a major employer and purchaser of local crops and the canning factory needed a reliable supply of water to cool the cans.

The former Ausable River Conservation Authority built the dam “with the financial assistance of both the Town of Exeter, which also gained a supplementary water supply, and the Township of Usborne, because situating the dam on the road allowance upstream from Exeter meant the replacement of an obsolete Township bridge,” according to engineer Charlie Corbett in his article From an Engineer’s View in the booklet 40 Years of Conservation.

Today, Morrison Reservoir is one of the only inland lakes in the area. The lake isn’t used as a water supply anymore but it offers many important benefits such as habitat for aquatic and terrestrial species and recreation for residents and visitors. The water surface area of the lake, at the normal summer level, is about 25 acres. At the normal summer level, the maximum reservoir depth is about 16 feet with the average depth around six feet.

Andrew Dixon, in the booklet A Tour through 25 Years of Conservation (1971), wrote that if you like to fish, canoe, or watch birds, “then the Morrison Lake is for you and is a beauty spot worth a visit.”

The trails of the conservation area join with MacNaughton-Morrison Trail to form the eight-kilometre South Huron Trail.

Today, it is hard to imagine the local landscape without Morrison Dam, Morrison Lake, and the surrounding protected conservation area. David McClure, in his 2006 Annual Report article about conservation authority history between 1956 and 1960, wrote that the creation of Morrison Dam was one of the late-1950s projects that turned vision into action. He wrote that “the environmental benefits and recreational enjoyment,” of two major projects including Morrison Dam, “are the living legacy that grew out of the roots of that vision by local conservation pioneers.”

A community campaign took place to raise funds to create a pedestrian bridge, downstream of Morrison Dam, to join two sections of the South Huron Trail. This bridge, called Jones Bridge, provides trail users with a safer, more scenic alternative to walking beside vehicle traffic on the roadway in order to enjoy both trail sections.

The community raised more than $300,000 towards the trail bridge project, surpassing the campaign fundraising goal, and turned the Jones Bridge dream into reality in 2018.

The bridge is called Jones Bridge as it is dedicated by Donna Jones, in loving memory of Ted Jones, who was a dedicated community volunteer, conservationist, Exeter Lions Club member and Ausable Bayfield Conservation Foundation director.

The Brian Clarke memorial stairs have been constructed thanks to a generous donation, in Brian's memory, by his family.

To find out more about Jones Bridge visit this link:

For permitted (and prohibited) uses at Morrison Dam Conservation Area, please visit the 'Permitted Uses' web page at this link: