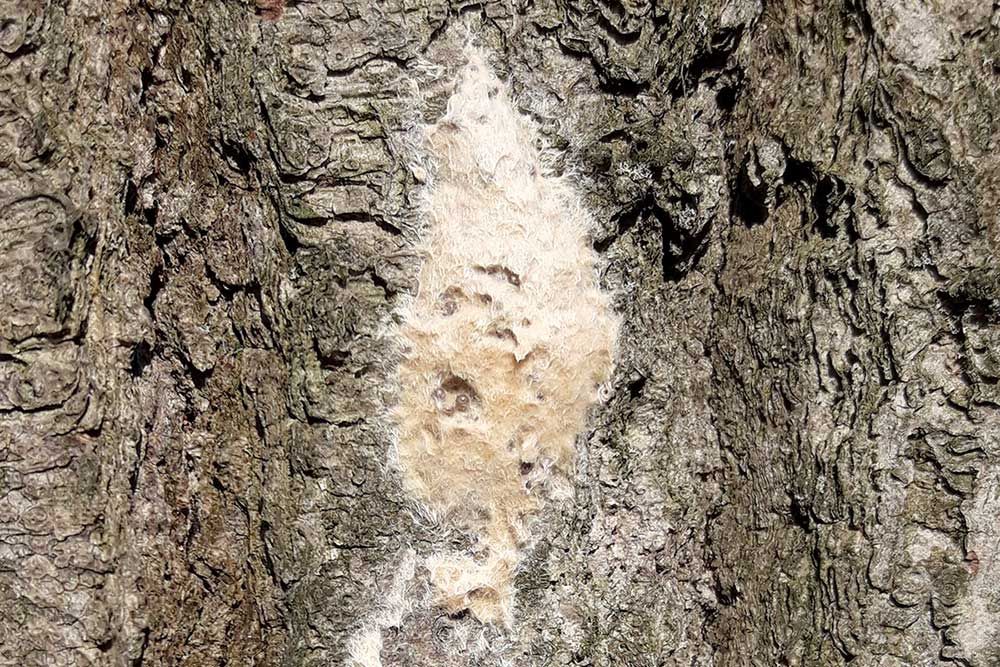 European Gypsy Moth is a defoliating insect (an insect that consumes leaves) and it can severely weaken trees. Ausable Bayfield Conservation Authority (ABCA) staff, while working in forests over the winter of 2019-2020, noticed a higher than normal number of Gypsy Moth egg masses. This follows localized infestations in Port Franks, Grand Bend and Hay Swamp in the summer of 2019. “We’ve definitely seen pockets with a higher than usual number of egg masses on trees, with some trees almost completely covered,” said Ian Jean, ABCA Forestry Specialist.

Gypsy Moth caterpillars feed on the leaves of several species of trees. “In our area, Oak, Aspen, Birch and Basswood are the tree species preferred by the Gypsy Moth,” said Jean. However, in years with high populations, Jean cautions caterpillars will move on from preferred hosts to eat a wider variety of trees including Maple, Pine, and Spruce. “When there are a lot of them, they’re hungry, they’ll eat whatever is available,” he said.

Homeowners can take steps to reduce the population now, according to ABCA. During winter and early spring, the caterpillars exist as egg masses which are clusters of 100 to 1,000 eggs, covered by a coating of tan-coloured hairs. Egg masses look a bit like a cocoon but are flatter and attached to the outside of tree bark, rocks, or the sides of buildings. “The egg mass is a critical stage and it is the most efficient time to manage this pest,” advises Jean. “By disposing of egg masses homeowners can, with minimal effort, eliminate literally thousands of potential caterpillars.” Egg masses are easy to scrape off surfaces with a dull scraper and dispose of in a ziplock sealable bag or similar bag. “It’s important to dispose of the egg masses,” said Jean, as eggs left on the ground will still emerge and find their way back up to the trees.

As the weather warms in late May and June, caterpillars tend to feed at night, and climb down the tree to shelter from the heat during the day. At this stage, burlap or light-coloured cloth can be wrapped around tree trunks to collect the caterpillars. “It is important to fold the burlap back over itself to create a cavity, they’ll congregate within there for disposal,” said Jean. Caterpillars should be collected and disposed of daily by scraping them into a bucket of soapy water and re-applying the burlap.

Gypsy Moth was introduced into North America in 1869 in Massachusetts with the intent of interbreeding Gypsy Moths with silk worms to develop a silkworm industry. It took another century before the moths were first detected in Ontario. Severe defoliations were experienced beginning in the 1980s and Gypsy Moth is now firmly established in southern Ontario.

Most years the caterpillars go unnoticed with many natural agents helping to keep populations low. Black-capped chickadees feed on egg masses in trees and rodents feed on those near ground level. Outbreaks have tended to occur every seven to 10 years in eastern North America. Fortunately, when populations spike, a viral agent, called NPV (nucleopolyhedrosis virus) usually causes a major die-off in caterpillars, ending the outbreak. In some cases, aerial application of the bacterial pesticide Bacillus thuringiensis subspecies kurstaki, a bacterium found naturally in soils and commonly referred to as Btk or kurstaki, has been employed to control very large and very severe infestations.

While defoliation is a major stress on trees, Jean advises “rarely does it kill the tree, and most recover and re-grow smaller leaves later in the same summer.”

Homeowners can take action now to reduce the caterpillar’s impact. Jean suggests people can “check out your trees, the side of your house, other surfaces and remove and dispose of those egg masses.”